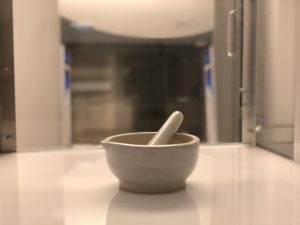 Columbia Compounding is family owned and operated by two generations of pharmacists. Our lead pharmacist, Kris, started as an intern at Virginia Mason Medical Center in Seattle, WA where he began making topical creams, ointments, injectables and nasal irrigations. He went on to receive his Doctorate in Pharmacy from University of Washington in 2010. Upon graduation he was hired by one of the premier compounding pharmacies in Seattle, WA. There he created brand new formulations and was soon promoted to manager of daily operations. Kris’s passion for compounding is evident both in the pharmacy, and at home where he is an excellent cook and home-brewer. He enjoys relaxing evenings in with good food, his wife, and his hilarious French Bulldog Carson.

A prescription from a licensed practitioner is required for compounded medications.

The content and photographs on this website are copyrighted or licensed material and may not be downloaded for any reason. Retransmission, republication, reproduction or any other use of the content or photographs is prohibited.

Manage Cookie Consent
To provide the best experiences, we use technologies like cookies to store and/or access device information. Consenting to these technologies will allow us to process data such as browsing behavior or unique IDs on this site. Not consenting or withdrawing consent, may adversely affect certain features and functions.
Manage options Manage services Manage vendors Read more about these purposes
View preferences
{title} {title} {title}